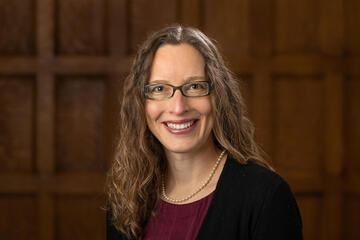 About: Gundula Kreuzer studied musicology, philosophy, and modern history at the Universities of Münster (Westphalia) and Oxford, where she earned her Master of Studies and D.Phil. in musicology. She held a Junior Research (postdoctoral) Fellowship at Merton College, Oxford, before joining the Yale Department of Music in 2005.

In both her writing and her teaching, Kreuzer approaches music from a wide range of interdisciplinary perspectives, such as social, cultural, and political history as well as theories of technology and multimedia. Her award-winning first book, Verdi and the Germans: From Unification to the Third Reich (Cambridge University Press, 2010), examines the changing impact of the popular Italian composer on German musical self-perception and national identity. Her second monograph, Curtain, Gong, Steam: Wagnerian Technologies of Nineteenth-Century Opera (University of California Press, 2018) addresses how composers since the late eighteenth century increasingly tried to control certain aspects of staging by embracing specific stage technologies. Focusing on the cultural resonances and hermeneutic potentials of the titular technologies of the curtain, the tam-tam, and steam before, in, and beyond Wagner, the book develops a deeply contextualized practical perspective on the nature and ephemerality of staged opera as well as its legacies in contemporary culture.

Together with Clemens Risi, Kreuzer guest-edited a double issue of The Opera Quarterly (“Opera in Transition”; vol. 23/2-3, 2011), and her critical edition of Verdi’s instrumental chamber music for The Works of Giuseppe Verdi: Series V appeared with The University of Chicago Press and Ricordi in 2010. She was Reviews Editor of The Opera Quarterly, served on the editorial board of the Journal of the American Musicologial Society, and continues to serve on the editorial boards of Cambridge Opera Journal, Musiktheorie, and VerdiPerspektiven.

Kreuzer also enjoys speaking and writing for wider audiences. She gained experience as a freelance radio presenter in Germany and has been contributing to broadcasts on WNYC and BBC Radio3. She also provides program notes, lectures, interviews, or podcasts for opera houses and festivals across Germany and the US, as well as having been a guest for the Metropolitan Opera Quiz.

In May 2019, Kreuzer launched a series of YOST: Y | Opera | Studies Today conferences at Yale (thus far on the topics of “Indie Opera,” “Developing New Opera in the Age of #MeToo,” and “Opera & Representation”) to foster a dialogue between practitioners and scholars of opera across and beyond campus and the East Coast. Since September 2019, this initiative has been complemented by monthly meetings of her Opera Studies Today Working Group at the Whitney Humanities Center.

Kreuzer’s first monograph won the 2011 Lewis Lockwood Award of the American Musicological Society, the 2012 Gaddis Smith International Book Prize of the MacMillan Center for International and Area Studies at Yale, and the inaugural Martin Chusid Award for Verdi Studies (2013). Among other grants and awards, Kreuzer was awarded the Paul A. Pisk Prize (2000) and the Alfred Einstein Award (2006) from the American Musicological Society, as well as the Jerome Roche Prize (2006) and the Dent Medal (2019) from the Royal Musical Association. At Yale, she received the Samuel and Ronnie Heyman Prize for Outstanding Scholarly Publication in 2010, was a Fellow at the Whitney Humanities Center in 2010-11, and a Senior Research Fellow in International and Area Studies at the Macmillan Center between 2012 and 2015. In 2015-16, she held a Research Fellowship at the Italian Academy at Columbia University. In 2022, she was elected a member of the Academia Europaea—The Academy of Europe.

“Kittler’s Wagner and Beyond,” Contribution to the Colloquy “Discrete/Continuous: Music and Media Theory after Kittler,” ed. Alexander Rehding, in Journal of the American Musicological Society 70/1 (2017), 228-33.

Verdi and the Germans: From Unification to the Third Reich (Cambridge: Cambridge University Press, 2010; series New Perspectives in Music History and Criticism).

“Oper im Kirchengewande? Verdi’s Requiem and the Anxieties of the Young German Empire,” Journal of the American Musicological Society 58/2 (Summer 2005), 399-449.