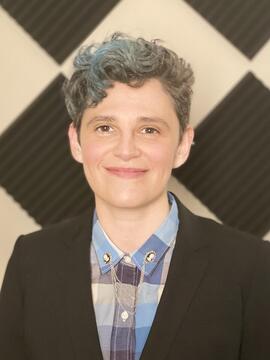 Anna Zayaruznaya received her Ph.D. in historical musicology from Harvard University in 2010. She taught at New York University (2010–2011) and Princeton University (2011–2013) before coming to Yale in 2014. Bringing the history of musical forms and notation into dialogue with medieval literature, iconography, and the history of ideas, Zayaruznaya’s recent publications have focused on French and northern Italian music of the fourteenth and fifteenth centuries. Her first book, The Monstrous New Art: Divided Forms in the Late Medieval Motet, explores the role of monstrous and hybrid exempla in the musical aesthetics of fourteenth-century French motets. A second book currently in progress will focus on poet, composer, and public intellectual Philippe de Vitry (1291–1361).

Zayaruznaya has published articles and reviews in venues including the Journal of the American Musicological Society, the Journal of Musicology, Early Music History, Digital Philology, and Speculum, and has served on advisory and editorial boards for the Journal of Musicology and Music Theory Spectrum. In 2011 she was awarded the Van Courtlandt Elliott Prize from the Medieval Academy of America for her article “She has a Wheel that Turns…’: Crossed and Contradictory Voices in Machaut’s Motets” (Early Music History, 2009). Zayaruznaya has also received awards and fellowships from the American Musicological Society, the Institute of Advanced Study at Princeton University, and the Radcliffe Institute of Advanced Studies at Harvard University, where she spent the academic year 2013–14 as a fellow.

“‘Sanz note’ & ‘sanz mesure’: Toward a Premodern Aesthetics of the Dirge,” in Voice and Voicelessness in Medieval Europe, edited by Irit Kleiman, 155–75 (Palgrave Macmillan, 2015).

“Hockets as Compositional and Scribal Practice in the ars nova Motet—A Letter from Lady Music,” Journal of Musicology 30 (October 2013).