Yale University and the New Haven area provide a rich and diverse musical life.  While the majority of performance offerings focus on Classical repertoire – ranging from medieval to the most current compositions – opportunities also exist in the areas of folk, jazz, music technology, musical theater, pop and world music. Visit Our Showcase: Audio and Video to hear the creative work and performances of our students and faculty. 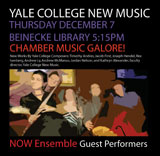 Students of the Department of Music – graduate and undergraduate, music major and non-music major alike – are invited to participate in a myriad of performance courses, large and small musical ensembles, theatrical musical productions and varied projects throughout the university.  Yale sponsors many faculty- and student-led musical ensembles and organizations, all of which are not for credit. 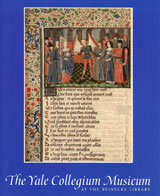 Ad hoc performance opportunities present themselves throughout the school year: student compositions, student recitals, chamber music groups, musicals, operas, and orchestras for opera, operetta and musical theater.  Notices of auditions and opportunities appear regularly on bulletin boards and on the Department of Music’s Current Announcements, and both undergraduate and graduate students may audition, though audition policies vary from ensemble to ensemble.

Because of its close proximity to the Yale School of Music, where approximately 200 performers of exceptional skill pursue advanced degrees in music, students of the Department of Music are able to benefit from world-class concerts, master classes, and operatic productions, and are inspired by daily interactions with members of the School of Music.  New Haven’s rich musical resources, such as the New Haven Symphony Orchestra, the Neighborhood Music School and many fine church music programs, are also available to students of the Department of Music.

Students hoping to enroll in the performance courses – as well as students auditioning for individual instruction, Yale Bands, the Yale Glee Club, or the Yale Symphony Orchestra – should arrive in September with two pieces ready for auditions.  It is best, but not required, if these two pieces are memorized.  Singers should have music for accompanists, who will be provided at the auditions.  Students may sign up for auditions at the Department of Music during the first two days of the semester.