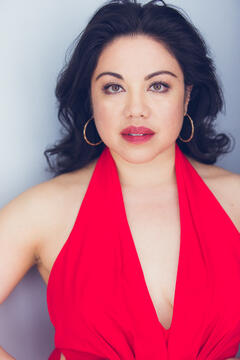 MARIA-CHRISTINA OLIVERAS is an award-winning actor, singer, and educator.  She has performed extensively on and off Broadway, regionally, internationally, and in film and television, and has served as a singer for esteemed artists, Taylor Mac, Toshi Reagon and Heather Christian.  Dedicated to new works and underrepresented stories that reflect the diversity of our world, her career is distinguished by her transformational character work in a number of world premieres, including most recently the role of Tolima in Kiss My Aztec by John Leguizamo and Tony Taccone, music and lyrics by David Kamp, Benjamin Velez and John Leguizamo at La Jolla Playhouse.  In 2018, she premiered and developed El Huracan, by Charise Castro Smith, directed by Laurie Woolery and Soft Power, a new play with a music by David Henry Hwang and Jeanine Tesori, directed by Leigh Silverman. Recent television appearances include The Blacklist and Madame Secretary.

As an educator, she has served on faculty at Fordham University Lincoln-Center, Yale University, Primary Stages, Stella Adler Conservatory, among numerous others, and frequently serves as a guest speaker at universities throughout the country.  She is currently serving as the Assistant Professor of Acting at Wesleyan University.

Maria-Christina is a founding member of Partial Comfort Productions, serves on the Board of The Civilians, is a member of the National Alliance of Acting Teachers and The Actors’ Center Workshop Company, and is an alumna of The Lark Playground and New Dramatists’ Composer-Librettist Studio, both dedicated to new works’ development and collaboration. She has served as a panelist and reader for various fellowships and programs including Sundance Institute, the Lark Play Development Center, New Dramatists, and Back to the Future/History Matters. She is the recipient of New Dramatists’ Charles Bowden Acting Award and the St. Ursula Award for Distinguished Career Achievement.